It is probably the last thing a person who has not been to Haiti would understand.  It is not what I thought I would be saying, I am in fact surprised by this revelation, but since leaving Haiti my heart has been heavy.  It is heavy because I miss Haiti.  I miss its beauty, its contrasts, its people, and its promise.

Though I have never been one to adhere to the “single story” phenomenon, what I have learnt, discovered, seen, heard and felt since being there has re-opened my eyes, served as a reminder in many ways, and has also caused me to reconsider myself in the grand scheme of who we are first as nationals of our own countries, as a people who share the region with people of many different cultures, beliefs, and ways of doing things, and finally, as part of the international community.

I have had to revisit my thoughts on patriotism or lack thereof.  I have had to question why things that seem obvious to layman eyes and non-experts, seem to be so difficult for those in authority to envision and implement.

With a heavy heart, I recall the days spent in Haiti.  They all feel like a movie in slow motion where special scenes come into sharp focus.  I remember the first day as we made our way through the streets of Port-au-Prince, the sheer number of people walking through the streets was overwhelming, the brightly coloured and oh so creative “Tap Taps” appeared in abundance at every turn on every street, everywhere, bumper to bumper, to motorcycle to people traffic, a city with no traffic rules, each man for himself, and each pedestrian a courageous soul in motion.  I recall the lively manner in which we were greeted by our chauffeur/negotiator/bodyguard during our stay. Undoubtedly, this trip may have very well been less colourful without his presence.  This sentiment we all shared.

Yes, I remember the tent cities where despite the look, the congestion, and the rations, the people  still walked with their heads proudly held high, walked to work, bathed on the sidewalk,  ran in the streets as they welcomed home “TiTide”…”In TiTide We Trust” said one sign.

I remember feeling moved,” as if by a Tsunami” said one of the fabulous five…as people began to run fearing that tear gas had been thrown into the crowd.  False alarm there was no fire, just smoke.  The energy around me was palpable, if only I could have reached out and bottled it.  Haitians are a proud people.  They are a people with purpose but whose purpose is stymied by other people and other forces not of their own making. 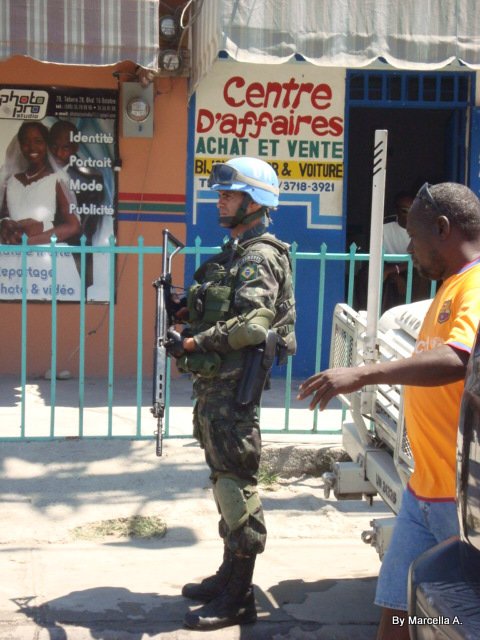 And then there were the persons in positions of authority, MINUSTAH, UN, The Prime Minister, all with their own story to tell, all with their own questions…the most telling “How can WE take CARICOM seriously, when as members of CARICOM we still require visa’s to travel through CARICOM?”  A fair question, I would say.  The external attitude of such great concern leading up to the return of Aristide to Haiti was almost non-existent in Haiti.  Instead, while the “agencies that be” were worried and concerned, I wondered, how dare anyone forbid a person to reenter their own country, the country of their birth?  How and why? The mood of the people spoke of anything but chaos.  Instead it spoke of excitement, love, pride.   Yet others spoke of stability and policing…and we saw a militarization of a country that by all accounts only needed a stronger police presence, not a military state.

The movie scenes play haphazardly, they take me back to the beauty that is evident in everything, the people, the metal work, sculptures and paintings that depict ever so well Haitian life, love, work, creativity unfolding in every form and seeping through every pore, but even this creativity has an edge that screams need.

The need to stay alive, at every cost, the need to make money, and so a negotiation over the price of a piece of artwork could turn from a discussion with one vendor to an immediate need for space once surrounded by twenty more all selling various parts of their own reality and trying to charm you to buy just one piece.

As people wait patiently for March 31st when the winner of the elections will be announced, I see visions of Campaign posters bearing slogans, tag lines…in one corner there is the singer, self-professed bad boy and Prezidant of Konpa – Michel Marthelly –“Tete Kale”.  In the other corner, the septuagenarian Madame Manigat – “Bamn Maman’m”. I recall the discussions about campaigns built on popularity and not integrity, rallies where music was the message and yet…where was the message for the country?  Coded messages.  I recall early Sunday morning polls where the expected violence and drama was really minimal where one man when asked how the voting was going said “it’s going so well, it’s almost finished!”.  Wyclef Jean, Pras,Busta Rhymes in the midst of the story but still somewhat irrelevant to the bigger picture, hype brought from the US transported to Haiti. 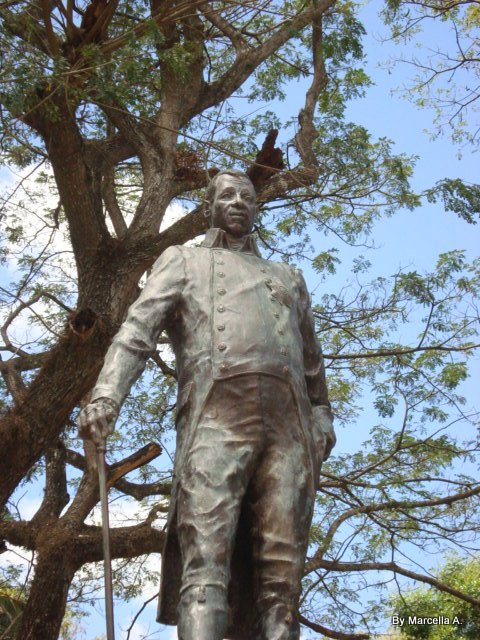 Zooming into one scene, the memory of my history books and history classes come into clear focus, I am standing on, in, surrounded by,  my history, OUR history –  which we do not celebrate.  Toussaint, Dessalines, Henri Christophe, The Citadel, and “HOSSES” (fearless five inside joke).  I am in Cap Haitien.

I am transported back to a chilly night on a hammock, serenaded by the sound of waves crashing against the shore, an early morning lounge on the beach and coffee delivered on the sand. Majestic mountains, passionate people, life going on.

I recall a hotel that could match any of “ours” in its beauty and beat us in service and attention to detail.  I am speechless at not only the potential, but what already exists and is left largely unnoticed and undiscovered by a Caribbean Community.

This discovery and education would not have been possible without the steadfast dedication of Fearless Five team leader AniiiiiKa (as our bodyguard/chauffer would say).  From conceptualization to realization, our visit to Haiti was more than worth the effort.  There were angels and guardians on all sides encouraging us and helping us to make our time there worthwhile, not only for us, but for everyone else who was watching, waiting, and hoping and helping.  Wesley Gibbings, Ambassador Earl Huntley, Bevan Springer, Mickel Brann and our Observer Team, Cathi-Ann Edwards, The entire American Airlines team who worked with us, Dieudonne, Meleck, and you the members of this group.

We encourage you to spread the word as we are just about to get started.  What you have seen thus far is but miniscule compared with everything else we will show you.  Expect more videos, photos, and commentary in the coming weeks and months.  To the ladies of the Fearless Five- what a pleasure, what an experience!  I salute you all.

Visit Echo Haiti to Read more of the Fearless Five’s journey through Haiti.